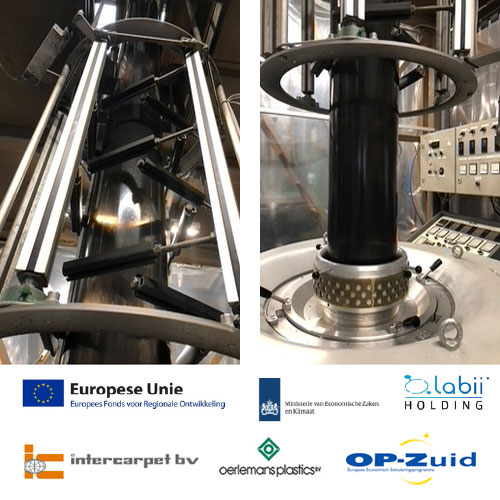 The motivation for this project is that the global carpet industry yearly produces millions of tons of poorly recyclable waste. The materials from which carpet is manufactured are in itself suitable for re-use. However, the threads in both woven and tufted carpets are glued together by applying a layer of latex on the back of the carpet, this is what's called the 'backing'. This layer of latex cannot be removed later, which means that the carpets are being dumped or burned.

Applying the latex precoat film is done by drystoking a watery emulsion in gas fueled ovens. This costs a lot of fossil fuel, the energy costs for applying a backing to a square meter of artificial grass approximate to 13 €ct, of which 7 €ct is natural gas. This comes down to a quarter cubic (m3) natural gas per square meter. Then imagine that the average carpet manufacturer produces 1 to a 100 million square meters of carpet per year: with that, the possible impact of this project is massive. The alternative backing-technology that is developed in this project, a hotmelt film, is applied through (electrical) infrared heating. This method requires less energy and makes the use of renewable electricity possible. Large carpet buyers from different industries are now faced with the choice to source durably. Recently, Vokswagen has made the choice to ban latex backing entirely. Also among (European) policy makers polls are being held to inquire if latex backing can be phased out, similar to what has been done with the light bulb a few years ago.

Oerlemans, Intercarpet and Labii Holding (Materials Factory) have been working hard on a OP-ZUID project with the name 'Latex free precoat film' for the last three years.

The goal of the prject was to replace the current used latex coatings by a (Ethylvinylacetaat) EVA-hotmelt film.

Oerlemans is a film manufacturer and is an expert in producing and developing films for diverse purposes, from farming films to food packaging, from radiation films to deep draw films.

In this project Oerlemans has worked to produce a film with a minimal specific thickness from a low viscosity EVA (MFI >500). The production method for this hotmelt film has initially been tried through a blown film. With this method a maximum film thickness of ±200µm and a width of 4,20m has been achieved.

Intercarpet is as a carpet manufacturer well versed in coating different types of carpet, among which residential carpet and artificial grass. The industrial coat-lines are currently mostly based on latex, with which the current products are manufactured.

Intercarpet has mainly worked on the use and the applying of rolled EVA-hotmelt films. One of the challenges for this industrial application is to adjust the film-width, the melting in of the film and to retain the properties of the carpet during the infrared heating.

During the pilots it was proven that films need to be of a certain quality to be able to smelt in with sufficient speed and homogeneously, without compromising the integrity of the carpet.

In the latex free backing project, the Materials Factory (Labii Holding) has mainly worked on researching possible polymers for this application, tuft lock properties, processing temperatures, carpet properties, and the applying of films and melting techniques.

The first customers have already shown interest for this energy saving product, and are currently awaiting the production of the first rolls of 4,20m width and diverse thicknesses.

Current estimates predict that the first rolls of 4,20m width hotmelt films will be delivered in the second quarter of 2022. Smaller hotmelt up until 3m width will be available sooner.

The result of this project has led to a circular artificial grass carpet with less energy expendature.

Latex free precoat film for carpets. The invention was patented and licensed to Mattex. In 2019 a Dutch Consortium has been founded further develop this technology. Besides the Materials Factory, Oerlemans Plastics and Intercarpet are part of this Consortium. Oerlemans will arrange blowing of the hotmelt film and Intercarpet will arrange coating of the artificial turf carpet with the hotmelt film. For the development efforts of this Consortium a Dutch subsidy called OP-Zuid has been granted (PROJ-02000).